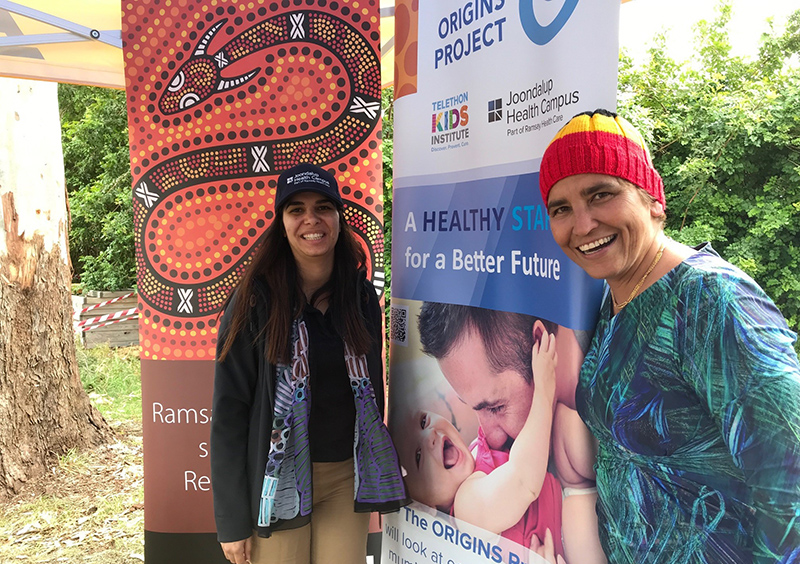 Hundreds of local people attended to enjoy a ‘cultural immersion’ experience, including a smoking ceremony, ceremonial dancers, art activities, bush tucker tasting, emu egg carving and several musical acts including Natasha Eldridge’s ‘Because of her we can’ – which was also the theme of this year’s NAIDOC Week.

Co-Director of ORIGINS and Head of Paediatrics at Joondalup Health Campus, Professor Desiree Silva, attended in support of the day and lent her expertise on childhood development and emergency medicine.

Professor Silva said the day had been extremely beneficial in connecting with the local Aboriginal community and explaining the support available to Aboriginal mothers, pregnant women, babies and children.

“We wanted to encourage local Aboriginal families to consider participation in the ORIGINS project, which offers regular health screening and check-up until the child is five years of age – and importantly, early intervention if any health issues are identified,” she said.

Professor Silva was joined by JHC Social Work Co-Manager Tracey Negus and Aboriginal doctor Bianca Howard, a Jaru and Kitja woman who currently works in the JHC Emergency Department (ED) to run a stall talking to visitors about all manner of health topics.

“The stories from the community members who had engaged with the stall were very positive and we were able to make great links and form partnerships with other organisations who specialise in Aboriginal community services,” said Tracey Negus.

The team also provided information about the JHC Aboriginal Health Committee initiatives, which include the upcoming appointment of an Aboriginal Liaison Officer, mandatory staff training in cultural awareness and the incorporation of Aboriginal artwork around the hospital.